Working on the homestead I am rarely unarmed.
Any sort of situation could come up that a firearm may be required.

For an example read this post.
Another example was a couple years ago my sister and I were cutting wood in my woods when her cell phone rang and it was my dad asking where she was. Seems the police had a running gun fight for about 30 miles down the interstate that ended in our town where my sister usually buys gas. My woods is 100 yards from a main road with an exit on that interstate. The bad guy could easily of ditched his car there and headed into our woods. When dad was a cop many years ago he drove the 4x4 blazer when they pulled an escaped convict out of a woods that he had fled into. Also believe it or not there was a bear killed in my woods in the 1960's here in NW Ohio. Really I have pictures!! (ok it was an escaped pet but it was a bear none the less)

Quit a few times I have dispatched a 4 legged varmint with my handgun when otherwise I would of had to return to the house for a long gun and probably given it time to escape.

I have three main uses for handguns on my homestead, hunting, varmints and self defense . Some of the guns fall into more than just one category. 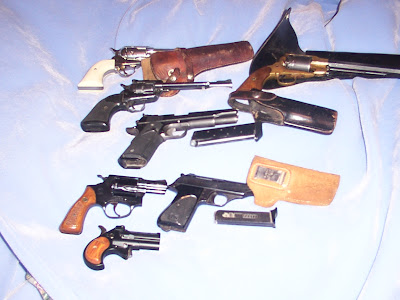 At the top is a center fire magnum I use for big game hunting. This one happens to be a .44magnum but you should use what you can shoot well. I have been shooting magnums since I was about 10 years old so recoil up to a .44 mag. doesn't bother me. (I've never shot anything bigger) Stainless makes this gun a great durable weapon on the homestead. It can also double as a personal protection gun. I had a 4" .44 mag. that I carried a whole lot, but here in Ohio you need a 5" barrel to be legal for hunting so I sold it and bought this one.

Right below that is my .22 rimfire. This little Ruger has ridden on my hip more that any other gun I own. (I've had it nearly 30 years) It is my trapping pistol and has killed more fur and put more food on my table that any other gun also. (well my elk rifle has put more pounds) When I was a teen hunting rabbits in Colorado, I started out using a 12ga. shotgun just like we used here in Ohio when I was a kid. When that was too easy I went to a .22 rifle, that was also too easy so I got this handgun and have used it for small game ever since. It is still the first gun I think of strapping on to work.

Below that is my Colt 1911 .45 ACP. This is mainly a self defense handgun but I have hunted small game and dispatched varmints with it. This was my competition gun when I competed in IPSC, I have well over 30,000 rounds through this gun and it's a toss up between it and the .22 on which I can shoot most accurately. (It's cool being able to shoot the head off rabbits and squirrels.) The one problem I have had with this gun is once while cutting wood I somehow hit the magazine release and walked around with an unloaded gun until I saw the magazine laying in the trail. (OOOPS!)

On the bottom are three concealed carry handguns that can be hidden on your person or even put into your pocket when you don't want to show that you are carrying a weapon. I tried shooting a grouse with the auto one time many years ago. After two magazines of misses I figure this category doesn't translate into hunting or varmint guns very well.

Top right is my old .44 cap and ball revolver. I included this one because it is the only one I have with a flap holster. A flap holster will keep your gun a whole lot cleaner than any other kind. Sure it is slower to draw from but in real life we aren't in quickdraw gunfights. A flap holster would of kept me from dumping the magazine out of my .45 and it sure would keep out the sawdust that gets in the nooks and crannies of whatever gun I am wearing while cutting wood.

Speaking of holsters the holster lying between the .44 and the .22 works for both. I have one for each but the other one is a different brand and I use this one because it keeps the gun out of the way better. I just switch out guns when I feel like carrying the other one.

On to feeding the working handgun: 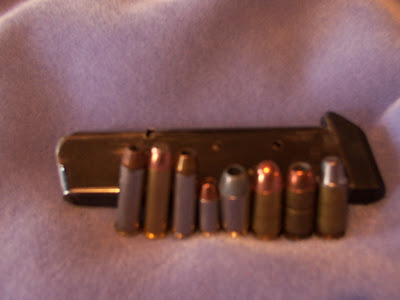 Here are the main types of ammo I use from the left:

- .357 magnum 158 grn softpoint - Hunting (hollow points tend to explode near the surface of big game since they are designed for self defense)

- .45 ACP Aguila IQ 117 grn alloy - 1500 fps - self defense- I have used this to dispatch a groundhog that had been hit by a car and was crawling across the road. I shot it in the head and the round penetrated and bounced off the pavement and I could hear it ricocheting off into my woods. This is some zippy ammo.

- .45 ACP 230 grain fmj - self defense /varmints good even for defense against large critters as it penetrates well to reach vitals.

For my .22 I use whatever is cheapest. I have CCI stingers for varmints if I have time to load them, but don't carry them too much since they shred meat if you hit a rabbit or squirrel wrong with them.

That about wraps up the different kinds of handguns and what they are used for on the homestead.
Stay tuned for part two shotguns and part three rifles, coming soon to a blog near me. (LOL)

Still clinging to my God and my guns,
Randy
Posted by Randy Augsburger at 7:35 PM 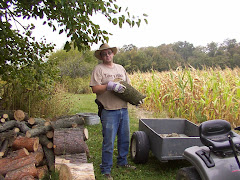